10 Things to Do in St Andrews, Scotland

Thanks to its seaside location, the Scottish town of St Andrews is synonymous with stretches of golden sand. But this beach enclave on Scotland’s east coast offers more than meets the eye: it’s also renowned for its well-groomed golf courses and student-friendly setting, home to the University of St Andrews. 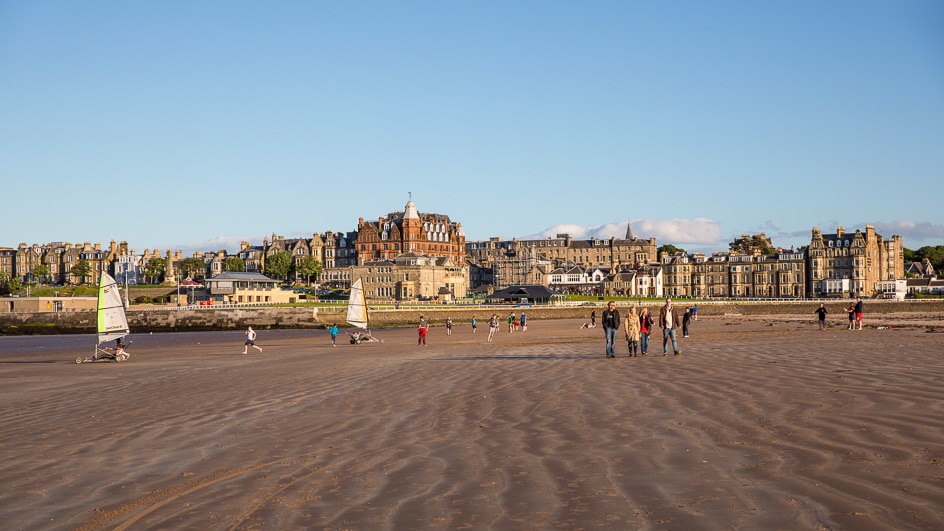 The Cathedral of St Andrews

The town of St Andrews is named after Scotland’s patron saint, and it is said that Saint Andrews was laid to rest at St Rule’s Church in town. In 1158, the cathedral was constructed to expand St Rule’s Church, at the time deemed too small to serve the local population. Over time, the town itself became the ecclesiastical capital of Scotland and attracted pilgrims from across Scotland and mainland Europe. Though the cathedral fell to ruin after the Scottish Reformation, today it’s a beautiful seaside site and an impressive reminder of Scotland’s Catholic history. 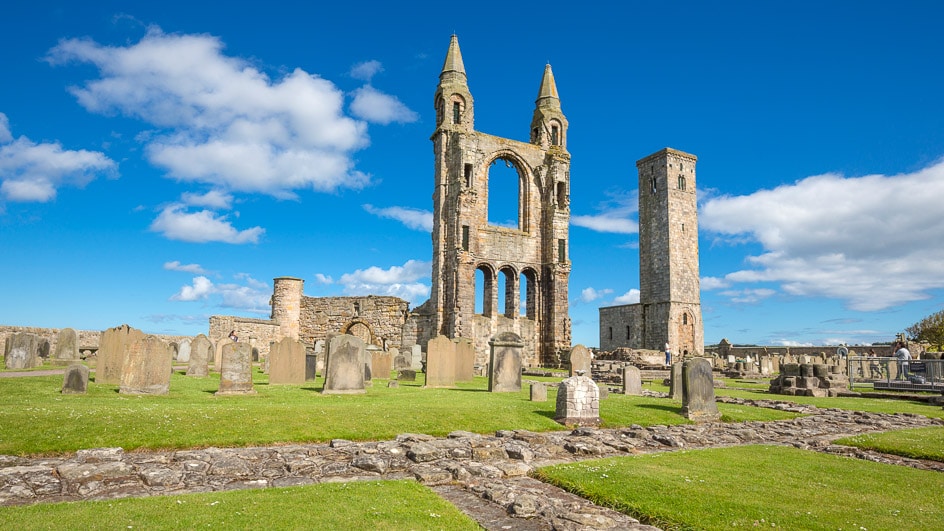 St Andrews Castle housed some of Scotland’s most powerful bishops and archbishops, and hosted a laundry list of bloody battles, murders, imprisonments, and executions. The castle saw the immolation of reformist George Wishart and the murder of Cardinal David Beaton, both of which were instrumental in the Scottish Reformation.

The castle fell into disrepair in the 17th century, and its stones were borrowed to support construction in the growing town. Today, sections of the castle still stand—including the so-called bottle dungeon where Protestant prisoners were held. Even if you’re not a history buff, the castle offers a delightful day of exploring, with its location on a lovely secluded beach and some of the best coastal views in St Andrews. 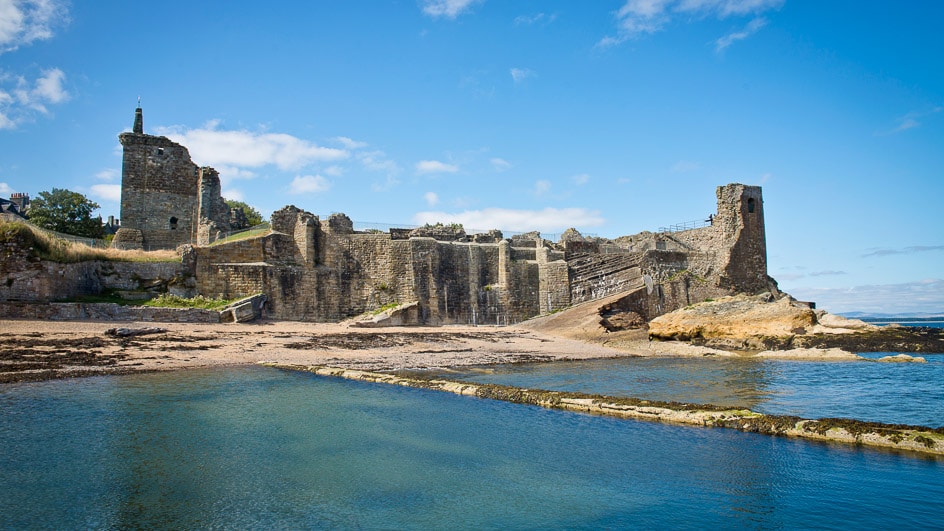 St Andrews is often referred to as the home of golf. As its known today, the sport owes a lot to the town of St. Andrews: an early version of golf was first played in the 15th century, on the site of what is now the Old Course—and the 18-hole game that endures today can be attributed to the design of the Old Course itself.

Additionally, the Royal and Ancient Golf Club of St Andrews was founded in 1754 and remains the most prestigious golf club in the world. Until the early 2000s the club was still one golf’s governing authorities, responsible for running the Open and administering the Rules of Golf along with the USGA. 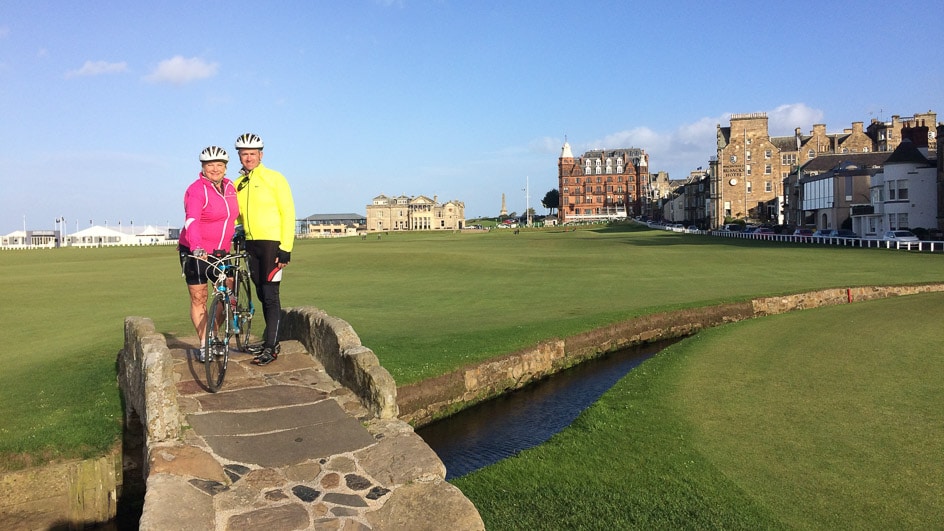 There are seven courses in St Andrews, with the Old Course considered the town’s most famous. As the oldest course in the world, the Old Course frequently hosts Open Championships. The Jubilee Course, although not as widely known, is rumored to be St Andrew’s most challenging—and it was originally designed for beginners! The latest addition is the Castle Course, known for epic views from a clifftop setting overlooking St Andrews.

Our Scotland Golf + Bike Tour is the best way to combine these championship courses with a bit of cycling—you’ll enjoy a guided tour of the Old Course, plus the opportunity to play on the Castle and Jubilee Courses. 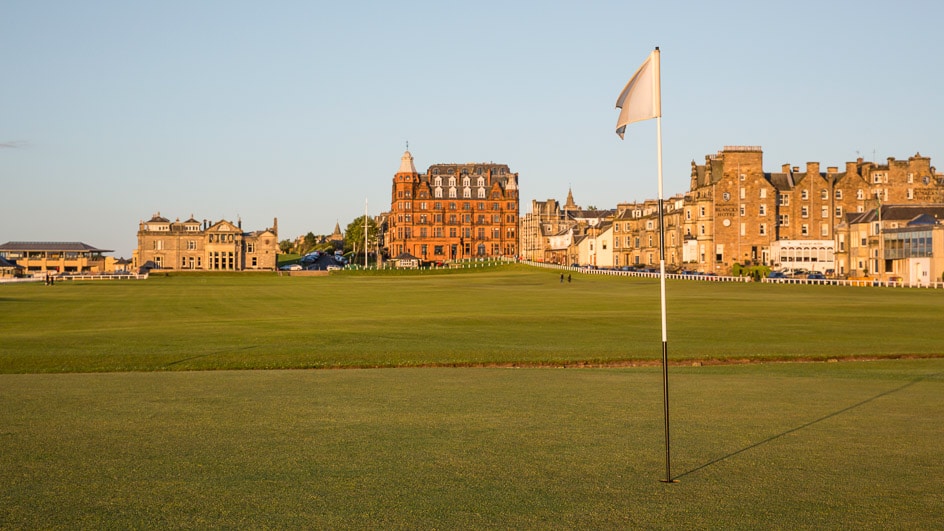 Sure to be featured on any list of Scotland’s best beaches, West Stands is a two-mile stretch of luscious sand famously featured in the opening scene of Chariots of Fire. The entire beach borders the St Andrews Links, and the designated footpaths make for a sublime stroll through the sandy dunes. West Sands also has dedicated areas for wind and water sports, and it’s one of the best places to try out the extreme sport of kite buggying. 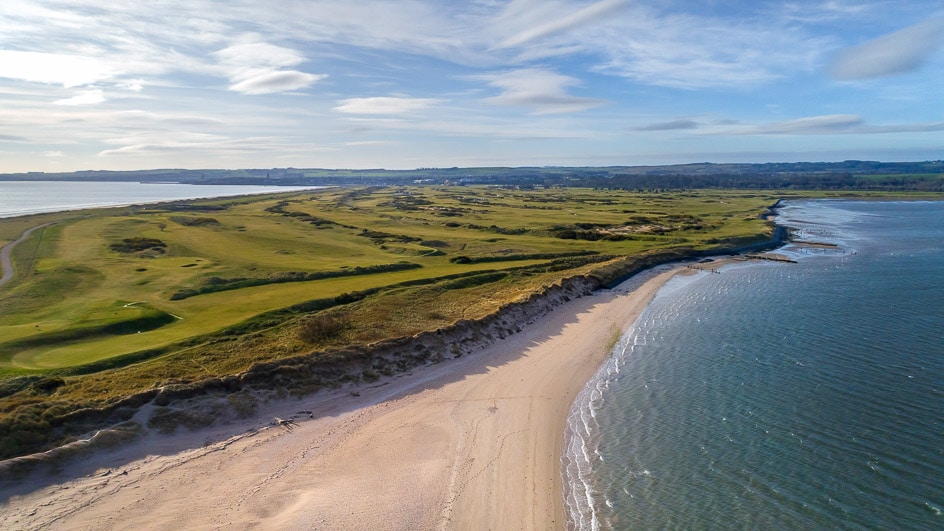 The University of St Andrews

The town of St Andrews is synonymous with the University of St Andrews. It’s the third oldest university in the United Kingdom (and the English-speaking world), consistently ranked as one of the most prestigious centers of learning.

The college sprawls across the town, housed in a blend of historic and modern buildings—many of which are open to the public. The University has shaped the town as much as golf and religious institutions, since roughly one-third of St Andrews’ population consists of university students. As a result, the town is vibrant, international, and ever-changing. And if you see an undergrad donning a red gown, it doesn’t mean you’ve arrived on graduation day: students are known to wear their academic robes throughout the year for any number of occasions. 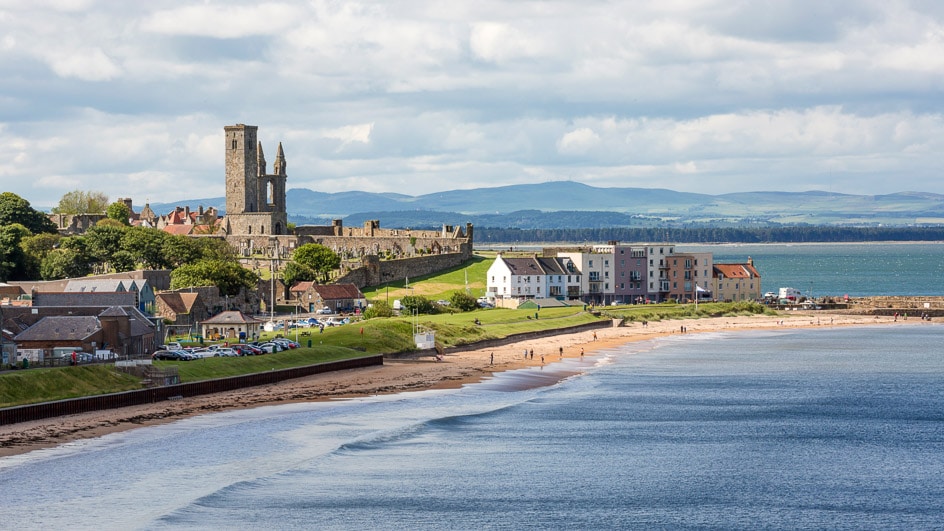 The Duke and Duchess of Cambridge met while studying at the University of St Andrews, and Prince William famously broke tradition by choosing to study art history at an institution other than Oxford or Cambridge. For those who follow the Royal Family, a tour of St Andrews can include plenty of stops that bear meaning to the courtship of the Duke and Duchess, such as the Northpoint Cafe where they were rumoured to have their first date. 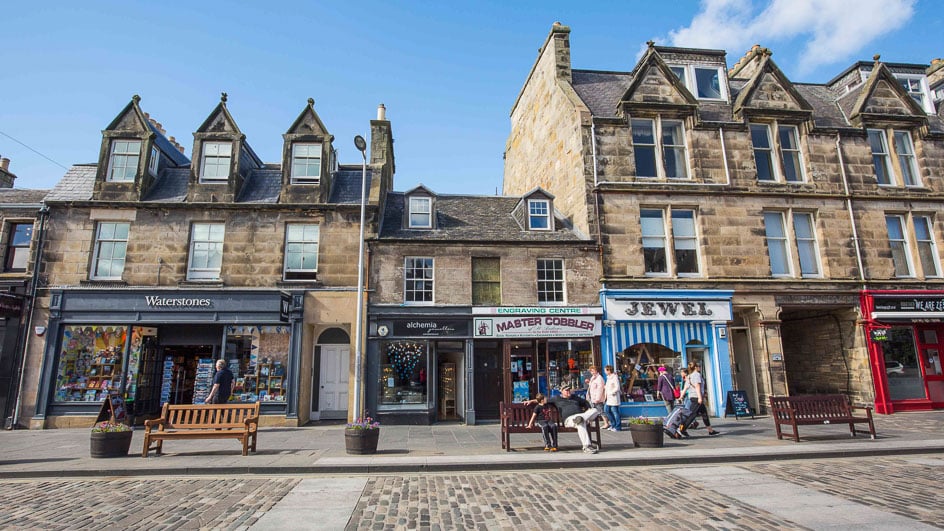 St Andrews is an ideal jumping-off point for exploring the rich traditions of Scotland’s coastal villages. Fishing towns such as Crail, St Monans, and Pittenweem are brimming with charm and picturesque cliffs and cottages—not to mention some of the best fish and chips you’ll ever taste. Tuck into this comforting meal in the seaside town of Anstruther, or stroll along the white-washed fisherman’s cottages in Elie. 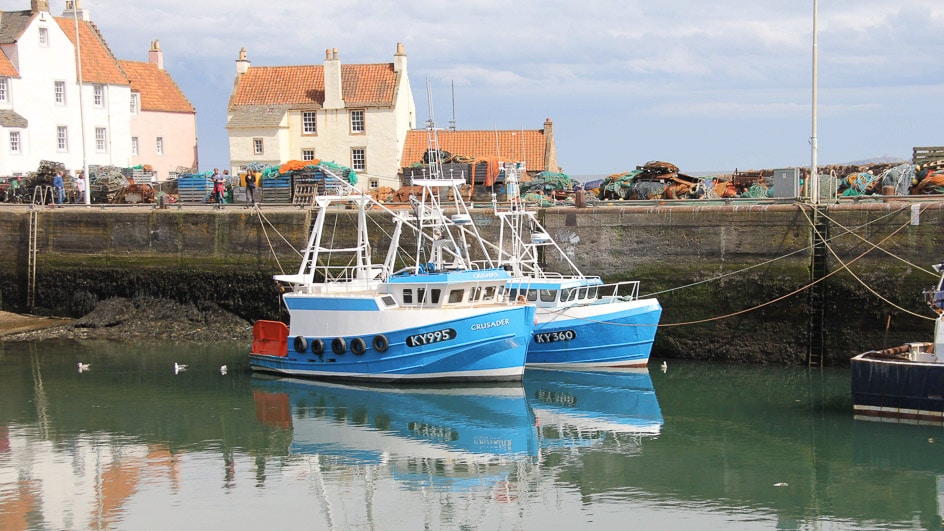 Head inland from St Andrews and you’re met with pastoral bliss: nicknamed “the garden of Scotland,” the county of Fife is a peaceful landscape of bucolic fields, colorful gardens, and sweet stone cottages. Agriculture is abundant in Fife due to milder weather than most other regions in Scotland—so you’ll find fruit farms, fields of grain, and creameries interspersed with meadows of wildflowers and lazy pastures. Scots look forward to summertime treat of Fife’s just-picked strawberries accompanied by fresh cream. 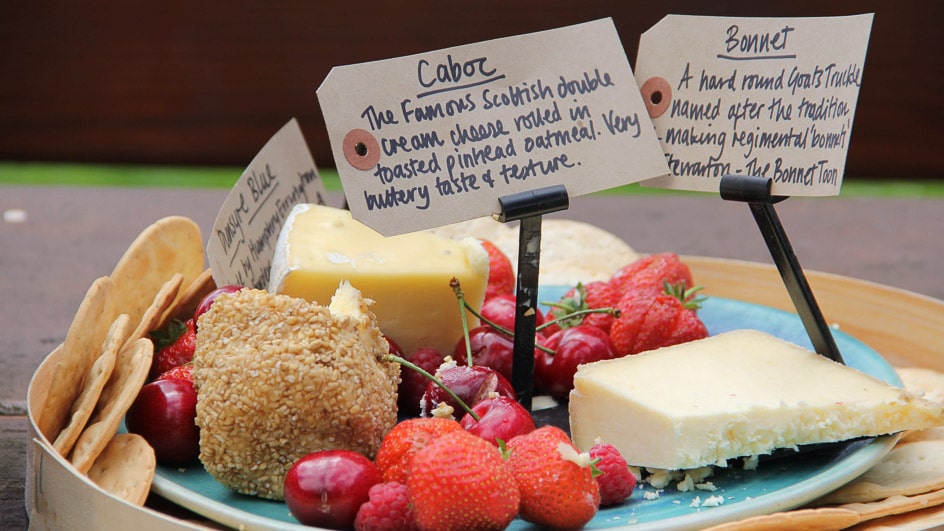 If the weather is a bit dreich (dull and gloomy) for a day in rural Fife, there are plenty of things to do just outside of St Andrews. The village of Falkland and its royal palace have been featured in shows like Outlander. More keen on history than pop culture? A Cold War relic called the Secret Bunker is concealed 100 feet underground in an unsuspecting farmhouse and provides a fascinating look at Cold War-era preparedness. Or, pop over to Dundee and spend the day at the V&A design museum, an architectural masterpiece by Kengo Kuma that opened in 2018. 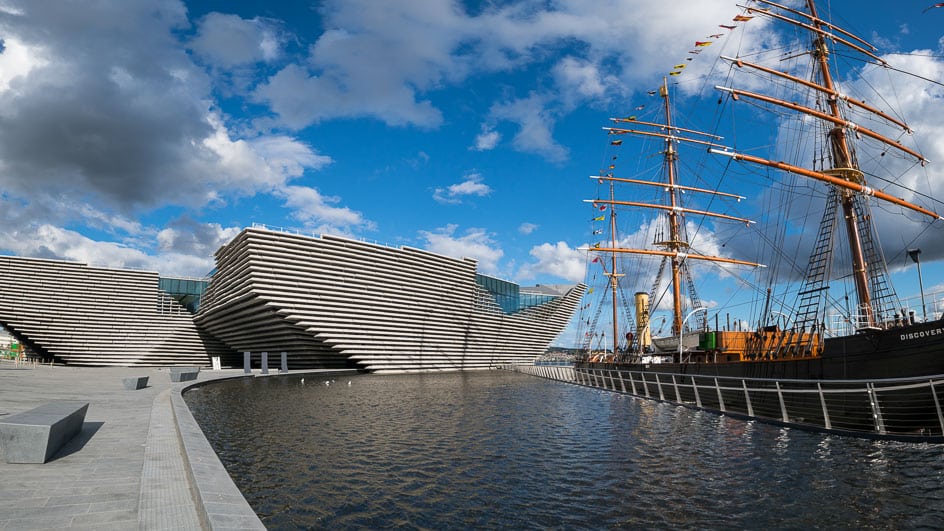 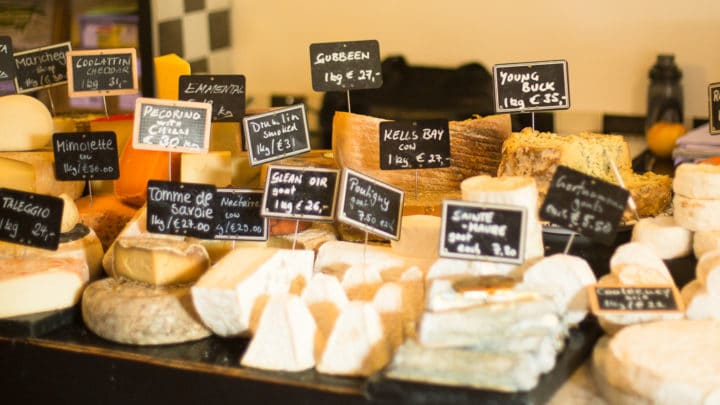 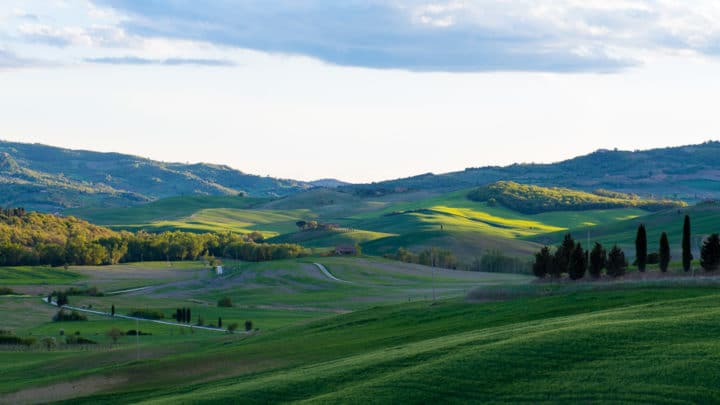 12 Photos of UNESCO's Most Spectacular Sites