May 2018. For the first time in history, Israel hosted one of the most prestigious cycling events in the world: the Giro d’Italia. I had the unique opportunity of attending. As a traveler and cyclist, it was beautiful to see cycling enthusiasts from all over the world put aside their religious and political affiliations to celebrate a common passion. I’ve returned to Boston feeling rejuvenated and hopeful, eager to share this positive energy with others. Here are my top 7 moments of cycling without borders at the Giro d’Italia in Israel.

The ride from Tel Aviv to Jerusalem was hot, hard, and hilly. Exhausted, we left our bikes behind to visit the Yad Vashem World Holocaust Remembrance Center. Suddenly, the challenge of our bike ride seemed inconsequential. Nothing could compare to the immensity of human strength and suffering these people experienced. My heart swelled with sadness, compassion, and hope.

Several exhibits later, we had the opportunity to attend a ceremony in honor of champion road cyclist Gino Bartali. Born in 1914 in Florence, Bartali played an important role in the resistance movement against Nazi occupation. This unsung hero risked his life by transporting forged documents back and forth across the country inside his bicycle frame. I felt my throat close up and tears come to my eyes as Bartali’s name was engraved on the wall of the Righteous Among the Nations, with Bartali’s granddaughter standing by. It was a beautiful reminder that we can all do our part as cycling superheroes, helping and inspiring people wherever we ride. 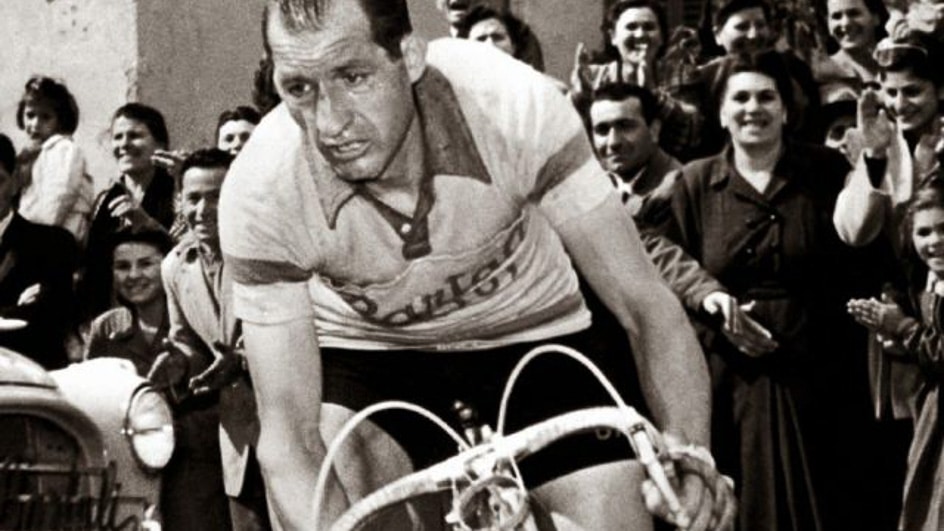 I had the opportunity to share my love of cycling with Giro VIPs at the event’s opening gala. Located in the old part of Jerusalem, the David Citadel garden was decked out with an open bar, amazing food, and a live Israeli band. Candles illuminated the garden and artistically rendered projections painted the hotel’s stone walls with color. This elegant and exclusive event blew me away and revved up the energy for the start of the 21-day race. 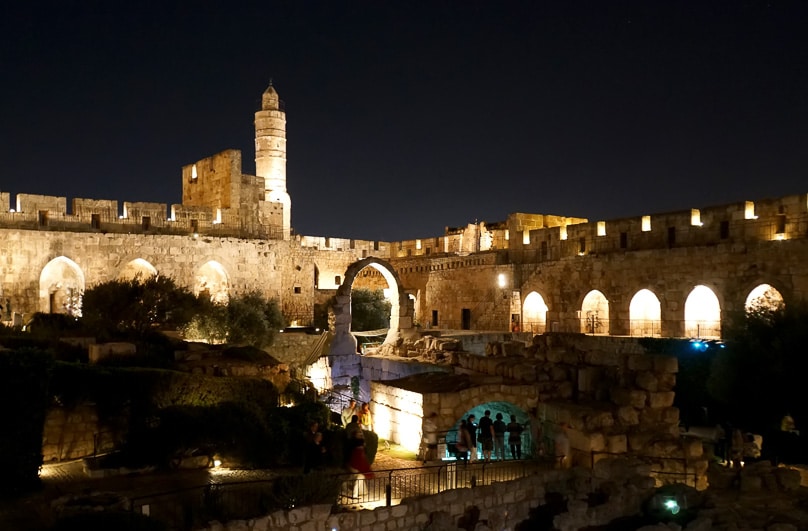 Whizzing up and down the hills of the capital city, we had the unique opportunity to warm up the asphalt for the Jerusalem Time Trail. This 9.6 km course was the first of three stages that Israel is hosting for this year’s Giro. After the ride, we joined an excited crowd of 10,000 to cheer on the pros. The Giro is the largest sporting event ever hosted by Israel, and the pride of the local fans was palpable. We watched as, one by one, the 176 riders left the gates in 1-minute intervals, zipping past Jerusalem’s holiest sites at an average of nearly 30 mph. It was humbling and exhilarating to watch the pros finish the course in under 13 minutes, nearly 4 minutes faster than us! 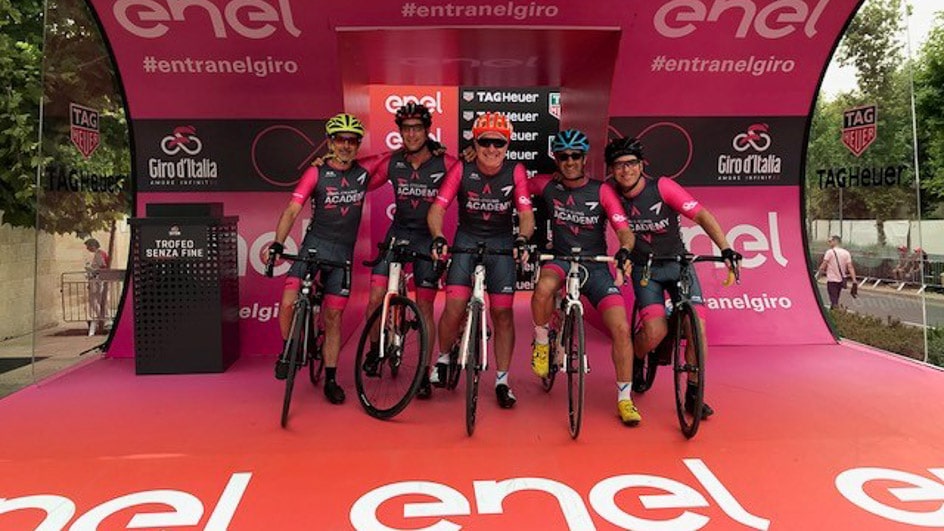 We traded cycling cleats for walking shoes and headed out for a private tour of Jerusalem’s Old City. Cycling wasn’t far from our hearts, however: we were joined by retired professional cyclist and 2012 Giro d’Italia champion Ryder Hesjedal.

We walked through time-warped old streets and underground bazaars, stopping to sample mouthwatering hummus and crispy homemade falafel. After lunch, we headed to the Western Wall. Also called the Wailing Wall, this ancient limestone pilgrimage site is the holiest place where Jews are permitted to pray. People from all over the world slip pieces of paper containing prayers in the crevices of the wall. I wrote a note wishing for health and happiness of my loved ones, my puppy Albi and everyone who works at DuVine.

Riding with the Israeli Cycling Academy

The inspiration continued as we joined the Israel Cycling Academy for a training ride in the hills outside of Jerusalem. As we sampled Israeli coffee and delicious poppy seed babka at the Bar Bahar café, our fellow riders proudly shared the history of the ICA.

This atypical cycling academy is Israel’s first professional team. It is the only cycling team whose budget is based on philanthropy, and although the majority of the participants are Israeli, cyclists of all religions and nationalities are welcome. The team was started by Israeli businessman Ron Baron and ex-professional cyclist Ran Margaliot. When Margaliot’s cycling career came to a premature end, he joined forces with Baron and other philanthropists to pursue his dream of inspiring future generations of riders. The academy works in local communities to get kids on bikes and enables young cyclists to compete in the international arena.

As they recounted the story, it was clear that the ICA has become a source of hope and faith for Israeli cyclists, and proof of cycling’s potential to bring people together. After the ride, we returned to our hotel with tired legs but lightened hearts. 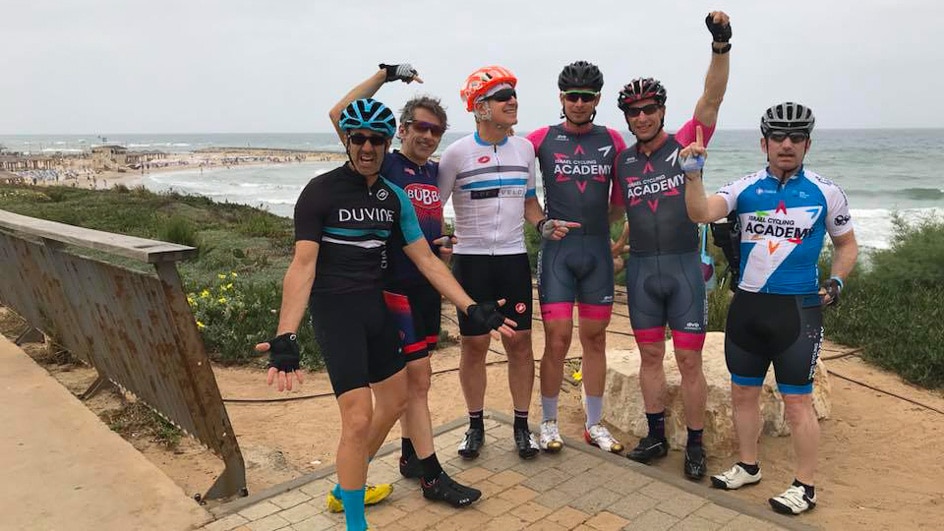 The Stage 2 Finish at Tel Aviv

A 90 km ride from Haifa to Tel Aviv took us through arid inland and along the sparkling Mediterranean. We cycled past fully clad Muslim women, Jewish families and groups of friends swimming and playing Kadima in the sand. It was a challenging ride with strong winds and dry heat, tempting us to join the locals in the water. We ended the ride with a sprint to the Giro d’Italia Stage 2 finish line.

We cleaned up and headed to the penthouse apartment of Canadian-Israeli billionaire Sylvan Adams. A cycling enthusiast himself, this “Godfather of Israeli cycling” was the first person to pitch the idea of bringing the Giro to Israel. Adams had invited a select group to his apartment to celebrate, including Israeli model Bar Refaeli and the Mayor of Jerusalem. With an amazing view out over the city, we popped bottles of champagne and cheered on the riders as they sprinted to the finish line below us.

Dinner at The Old Man in the Sea

My favorite dinner of the week was at The Old Man and the Sea in the ancient port city of Jaffa. Located in the oldest and most southern part of Tel-Aviv-Yafo, Jaffa is a melting pot of cultures. Inspired by Hemmingway’s 1952 novel, this restaurant is a cultural establishment and theatrical scene all in one. It’s a place where people of all religions and nationalities come together to appreciate excellent food and a lively atmosphere. Waiters run between tables like whirling dervishes, yelling at one another in Arabic and throwing down plate upon plate of Israeli-style tapas. Live Arabi-Israeli music and candlelit tables add a mystical vibe to the chaos. We sipped fresh squeezed lemonade and sampled countless plates of artichokes, hummus, fish and kebabs as we gazed out over the moonlit Mediterranean. 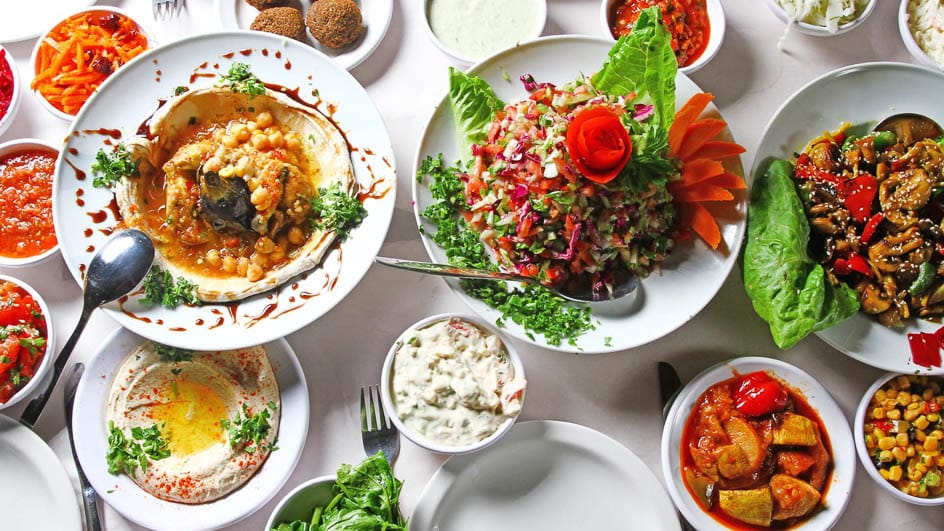 Up Next: DIY Bike Maintenance 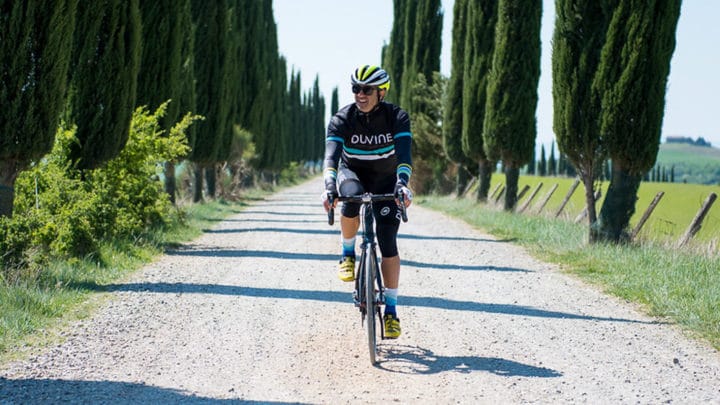 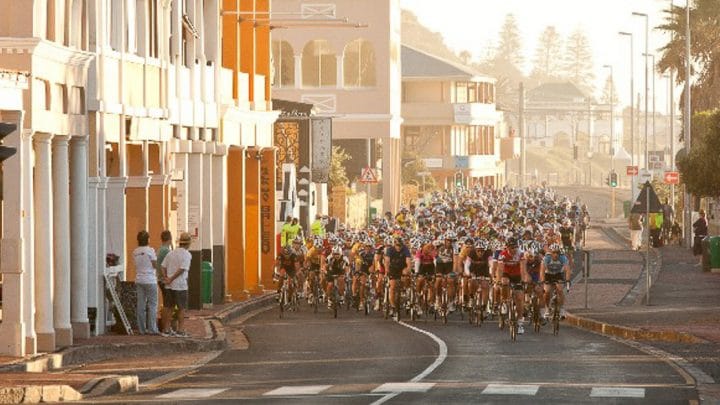 The World’s Best Gran Fondos: Choosing the Right Race for You