9 Cycling Hotels Worth Visiting in Winter

With the Holidays over, the winter blues have kicked in for many of us. Especially cyclists, who dream of warmer days as we’re stuck at home sweating it out on the trainer.

That’s why we’ve rounded up a few of our favorite mountain hotels. These high-altitude refuges—some grand, some rustic, all of them uniquely luxurious—are wonderful places to stay whether in summer or winter, on the bike or a pair of skis. From funky Relais & Châteaux hideaways in Vermont to stunning Dolomite properties with 3 Michelin-starred dining, here are nine hotels worth waiting out a blizzard in. 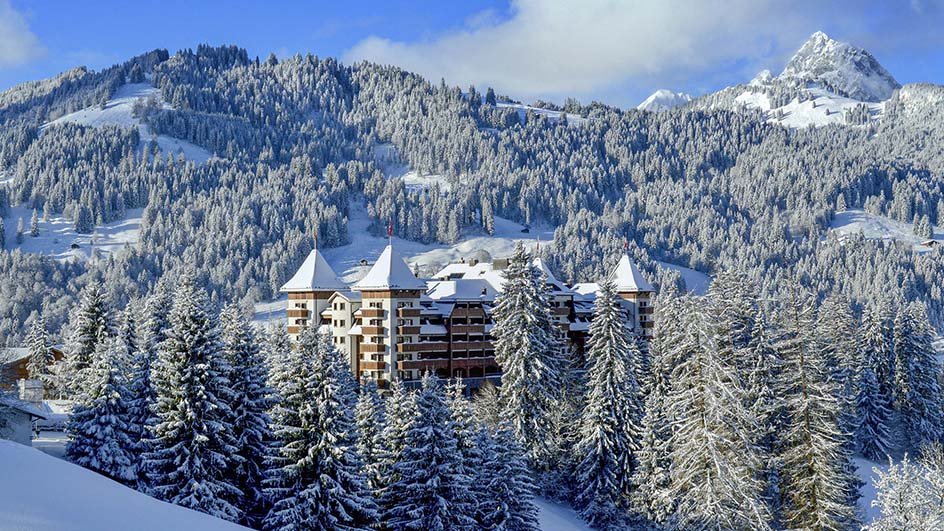 As far as Swiss ski resorts go, Andermatt is a bit off the radar. In summer, it’s a cyclist’s paradise, offering easy access to some of the most acclaimed climbs in the Alps—namely the Furka, Grimsel, and Gotthard, which features 24 cobbled switchbacks. Come December, however, Andermatt was long a ghost town, frequented only by the Swiss military and no-frills big mountain skiers, who flocked here for the plentiful powder.

That all changed in 2013 when the five-star 169-room Chedi opened its doors. Part of a $1 billion plan to resuscitate the ailing ski resort, the Chedi now forms a focal point to the little village without ever feeling intrusive. The property’s peaked roofs mirror the surrounding mountains, while inside sleek stone and timber abound, fires flicker, a 6,000-bottle wine cellar ensures après-ski festivities remain lively (unless, of course, you’d prefer to bliss out in the 2,400 square meter spa), and the Michelin-starred Japanese restaurant (try the 10-course kaiseki menu) offers a welcome break from all the fondue you’ve no doubt been noshing. The surrounding ski resort has followed suit, upgrading lifts, restaurants, and trails, while also connecting over the Oberalp Pass (another bragging-rights climb worth notching on your bike) to nearby Sedrun and Disentis, thus transforming once sleepy Andermatt into the stuff of skiers’ dreams.

Want something a bit more boutiquey and affordable? We love The River House in the town’s old section, a rustic and hip hotel with an excellent whisky bar.

If summer is still more your season, you can test yourself on the area’s most arduous mountain passes (where the suffering is alleviated by the magical views) on our Switzerland Journey Bike Tour. 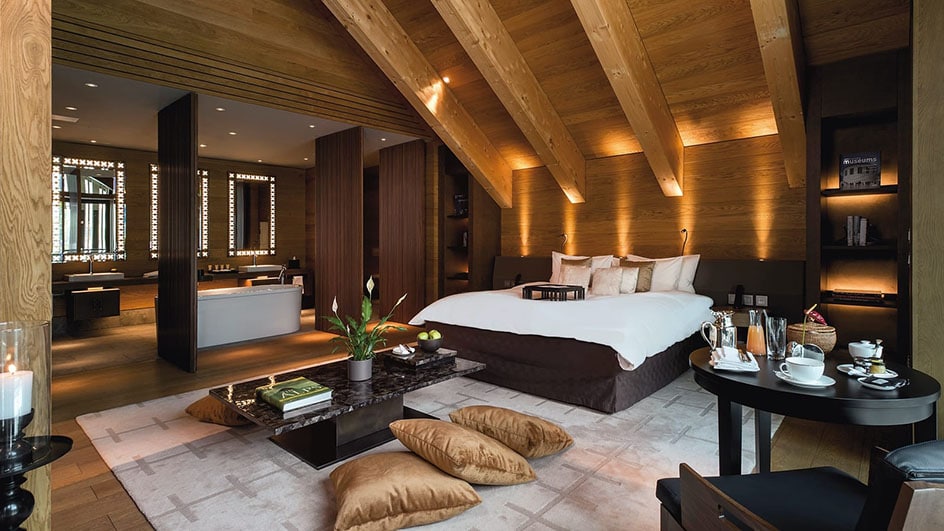 Perched above Vermont’s Mad River Valley, Sugarbush has long been a draw for East Coast skiers. In the early days, everyone from the Kennedys to Slim Aarons to fashion designers flocked here. Today, it’s more of a family affair, but the 111 classic New England trails (think narrow, fall-line runs) still challenge the most ardent of skiers.

In keeping with Vermont’s tradition of classic, clapboard country inns, the Pitcher Inn—a Relais & Châteaux property just three miles down the road from Sugarbush, in the charming village of Warren—is a fun take on the original. Dating back to Civil War times, today the hotel boasts two suites and nine well-appointed guest rooms, each with its own theme. Stay in the wood-beamed Ski room, where the decor ranges from toboggans to trail maps, or book the timeless Colonial, whose wood-burning fireplace is the perfect spot for a nap following a big day on the slopes. Two dining rooms lure guests downstairs, where you can sink into a cognac leather Chesterfield sofa while Chef Jacob serves fire-roasted pork loins, winter squash, and other seasonal fare.

Summer more your thing? The Mad River Valley boasts beautiful roads and excellent climbing. You can experience it all on DuVine’s Vermont Bike Tour. 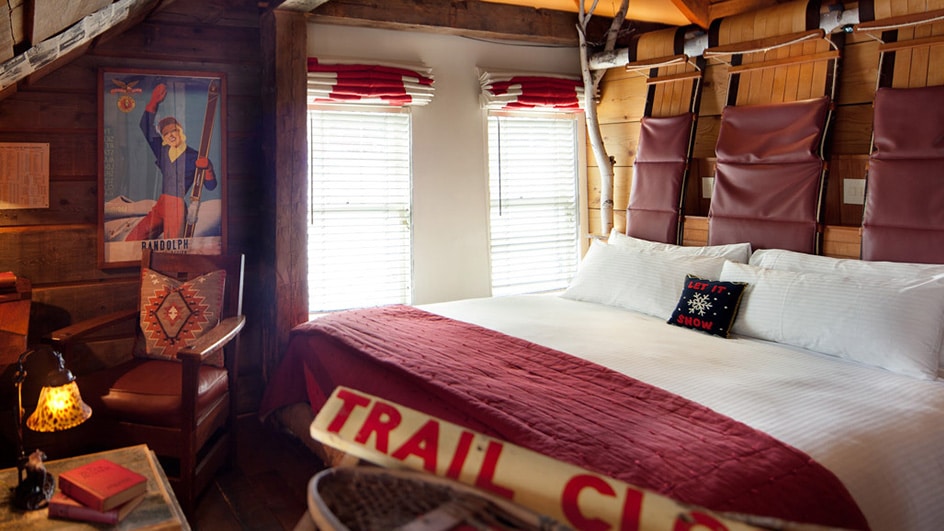 With its 21 switchbacks and history as a Tour de France kingmaker, Alpe d’Huez might as well be our sport’s Wrigley Field, Fenway Park, and Yankee Stadium all rolled into one. But the namesake town perched at the top of this vertiginous, eight-mile access road is equally popular in winter, when French skiers flock en masse to a massive ski resort that tops out at nearly 11,000 feet.

Accommodations are equally impressive. While there are plenty of properties to choose from, we love the four-star Hotel Grandes Rousses, which offers a contemporary take on the traditional ski chalet. Sleek, wood-hewn rooms and suites feel modernly luxurious instead of stuffy, and the south-facing balconies provide excellent views of the saw-toothed Alps. Speaking of chalets, there are two flag stone-roofed ones on site, offering the ultimate in ski in/ski out seclusion. Feeling peckish and social? This wouldn’t be France without food and wine, so grab a high-top at La Ferme, the more boisterous of the hotel’s six restaurants, where you can dine on sustainable farm-to-table cuisine under the glow of dangling Edison bulbs refracted by the eatery’s mirrored ceiling.

Still want to conquer Alpe d’Huez’s 21-turns by bike rather than race down its ski slopes? Join us on our seven-day Alps Journey Bike Tour. 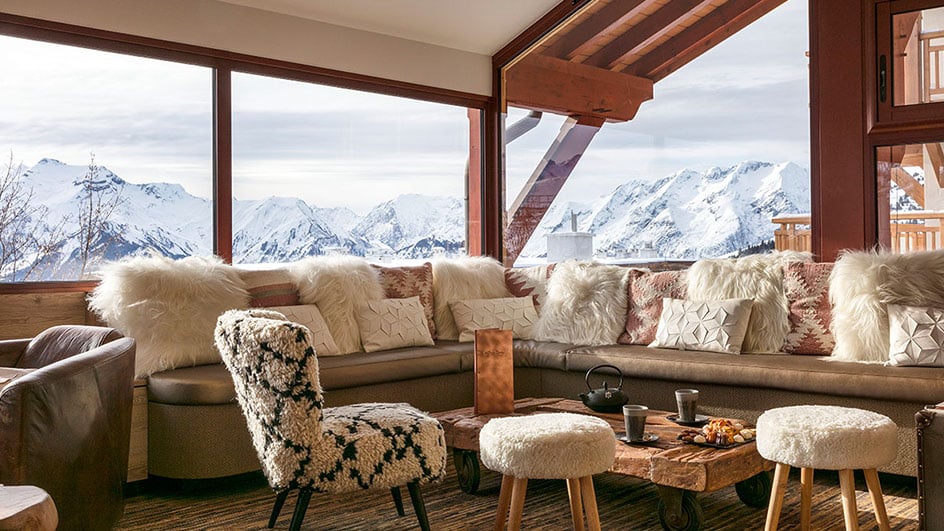 When it comes to American skiing, and mountain towns in general, few rival Aspen (just ask DuVine founder and CEO Andy Levine). This former mining enclave turned world class ski destination—the slopes were modeled after Austria’s acclaimed Arlberg, where some of the region’s early winter pioneers originally hailed from—boasts four separate mountains, all available on the same lift ticket. And then there’s the nightlife. From swank cocktail lounges to chic restaurants to velvet roped clubs, Aspen gets down better than most big cities.

With all that skiing and boogying, what’s our favorite place to turn in for the night? Look no further than The Little Nell. Situated at the base of Ajax, this ski in/ski out five-star lodge is the ne plus ultra of mountain retreats. Impeccable service? Check. Gorgeous guest rooms? Check. A 20,000-bottle wine cellar? Check. Add a deft concierge (both in the lobby and on the mountain), perhaps the best après-ski in town, and an outdoor pool perfect for weary legs, and it’s no wonder many people consider the Nell, “the Aspen of Aspen.”

Aspen is not too shabby in summer either, especially by bike. With Independence Pass and the Roaring Fork Valley, it’s a hub for any two-wheeled enthusiast. See for yourself by joining us for our four-day Aspen Bike Tour this year. 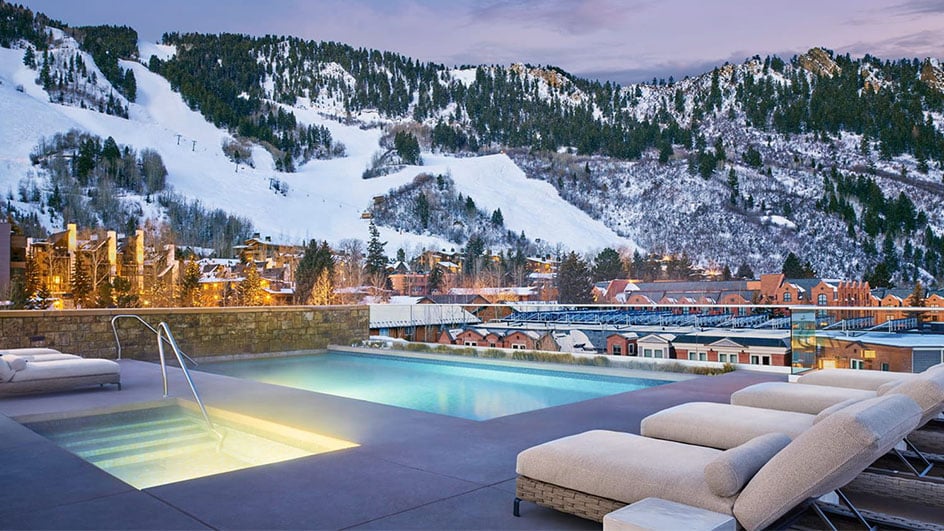 The Italian Dolomites are a cycling paradise. Otherworldly in their beauty, it’s the roads that wend through the pastoral fields and sheer limestone spires of this UNESCO-protected region of the Alps that has long attracted riders, from top pros to amateur enthusiasts.

Blanketed in snow, they’re just charming in winter, and the skiing—as should come as no surprise—is just as big as the riding. That’s due to the Sella Ronda, a connected “carousel” of ski resorts encircling the Sella massif. You could do far worse than staying at Rosa Alpina, one of DuVine’s favorite places to bunk up in summer. Authentically charming, with a three Michelin-starred restaurant, attentive staff, and beautiful rooms, it’s easy to see why this intimate, five-star family-run property is now an Aman Partner Hotel.

If tackling circuitous climbs like the Passo Pordoi, Passo Sella, and Pass Gardena sounds enticing, join one of our three Dolomites bike tours. 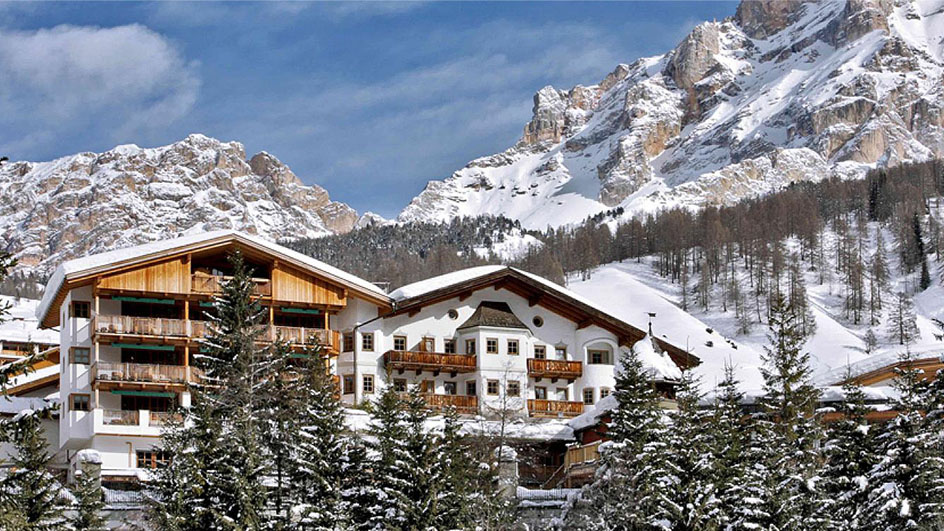 While some French ski resorts erected brutalist-style hotels in the 1960s and ‘70s, Megève has always kept its aesthetic classic. Think cobblestones, cozy chalets, and narrow streets along babbling brooks. The skiing here is similarly low-key, with most trails meandering through the trees.

Les Fermes de Marie couldn’t encapsulate this vibe any better. This former farmhouse, once on the brink of ruin, is now a five-star hotel, replete with fireplaces, period furniture, aged oak guest rooms, lovely fabrics, and even private chalets. Post up in front of one of the many fireplaces, lounge on a couch for a game of chess, or grab an aperitif in the atmospheric library. There’s an on-site ski shop, an indoor lap pool, and Le Restaurant Traditionnel—with its beams and vaulted ceiling—entices with decedent Croques Madames, as well as the open wood fire rotisserie open on Saturdays.

Anyone who’s watched the Tour de France knows how special the French Alps are in summer. See for yourself by joining our tour. 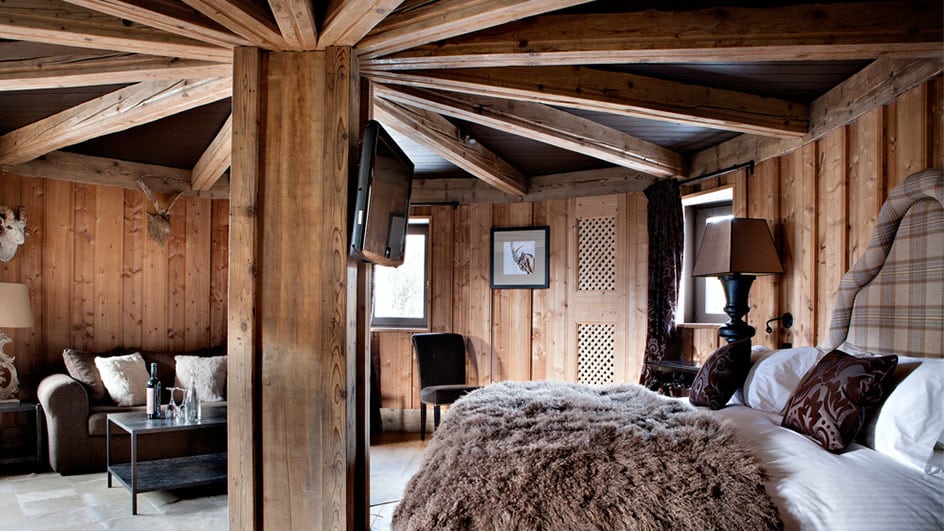 Cortina is another name synonymous with European skiing and timeless luxury. The 1956 Winter Olympics took place here in the queen of Italian mountain resorts, and James Bond schussed down the same slopes in For Your Eyes Only. This resort has always been a draw for the jet set, as well as wealthy Milanese on ski holiday. The town is lovely, and the serrated scenery—marked by Dolomiti peaks like the soaring Tofana—make for a stunning set design, especially at sunset when they glow like pink sandstone.

Above town, the Cristallo Resort & Spa embodies old world, European opulence without ever feeling over the top. Spacious guest rooms and suites look out onto the surrounding mountains, as does the sprawling spa and the lounge bar—an ideal place for a post-ski spritz or one of their signature cocktails. Four restaurants cover your dining needs (we love grabbing a schnitzel and strudel beside the warmth of La Stube 1872’s tiled kachelofen), or opt for the Chef’s Private Table if you and your party want something more intimate and memorable.

Cortina is beautiful in summer, too, and the cycling just might top the skiing. Ride through the wonderful Ampezzo Valley, conquer sinuous passes, roll past baroque churches, and hike the hills to remnants of World War I forts. Join us on our six-day tour of the region this summer! 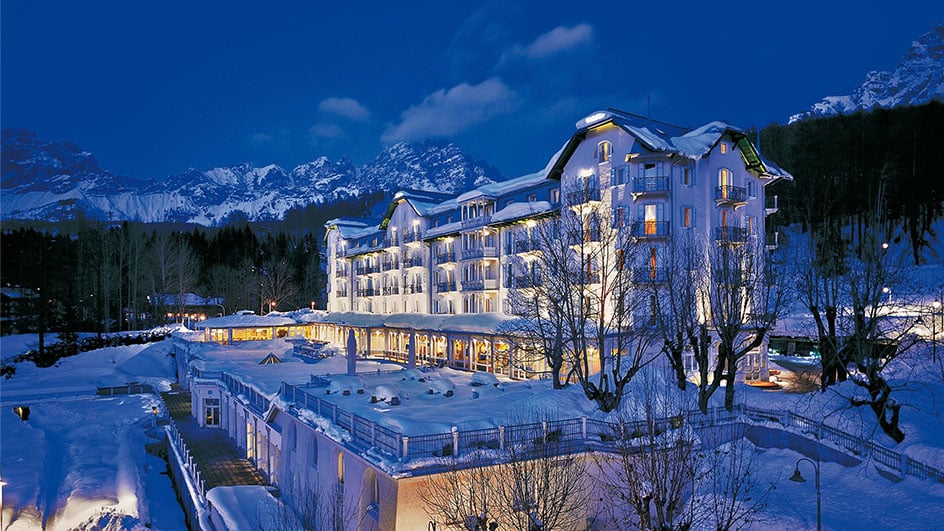 Gstaad has been drawing well-healed skiers for decades. Add non-skiers to that list as well. This charming mountain town tucked in the Bernese Alps causes such a scene each winter (thanks to a cadre of royals, business moguls, and movie stars), that the social scene often overshadows the skiing.

That’s not to say Gstaad isn’t a breathtaking setting of Swiss alpine serenity. Rolling hills and jagged peaks provide the stunning backdrop, and charming wood chalets dot the valley. Rather than stay at one of the grand hotels, like the place’s eponymous Palace, book at the 56-room Alpina. Perched in the hilltop neighborhood of Oberbort, this five-star offers discrete luxury in a traditional atmosphere. We love all three restaurants, including Executive Chef Martin Göschel’s Michelin-starred Sommet, with a menu inspired by various cultures, but it’s the Swiss Stübli that beckons time and time again. Grab a table in the rustic dining room, replete with corner booths and cowbells, for an excellent fondue or raclette.

In summer, Gstaad offers a more subdued affair, with excellent riding thanks to rolling roads, gentle climbs, and harder mountain passes nearby. Join DuVine on one of our three Swiss tours. 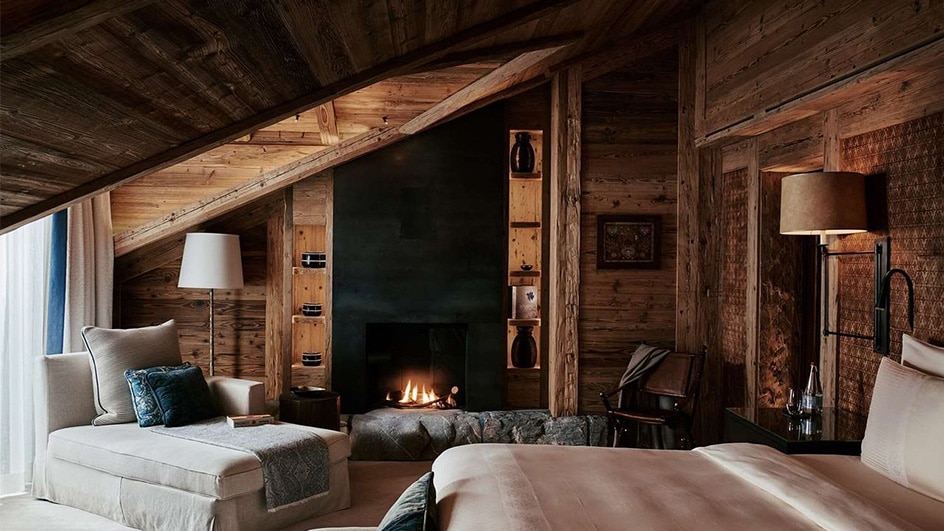 The Lodge at Blue Sky

Park City is America’s biggest ski resort, as well as its most accessible. Just 35-minutes from Salt Lake City Airport, you’ll feel a world away up here at seven thousand feet. Skiers are whisked up the mountain thanks to a fleet of state-of-the-art lifts, Utah’s powder is some of the deepest and driest on earth, and the town itself brims with old west charm.

Feel even more secluded at the Lodge at Blue Sky—an Auberge Resort. Situated on 3,500 private acres, this modern mountain retreat evokes the surrounding sepia-toned hills. Stay in the expansive Sky Lodge, one of the free-standing Creek Houses, or the Earth Suites—each built into the hillside and utilizing locally-sourced limestone. Get mindful in the cliff-perched Edge Spa with a yoga or meditation class, then hit one of the five treatment rooms for some bloom-to-bottle bliss. Dinner is in the sleek dining room (think minimal mountain luxury rather than austere), where James Beard Award-winning chef Galen Zamarra serves seasonal fare drawn from the surrounding area’s land and many cultures. 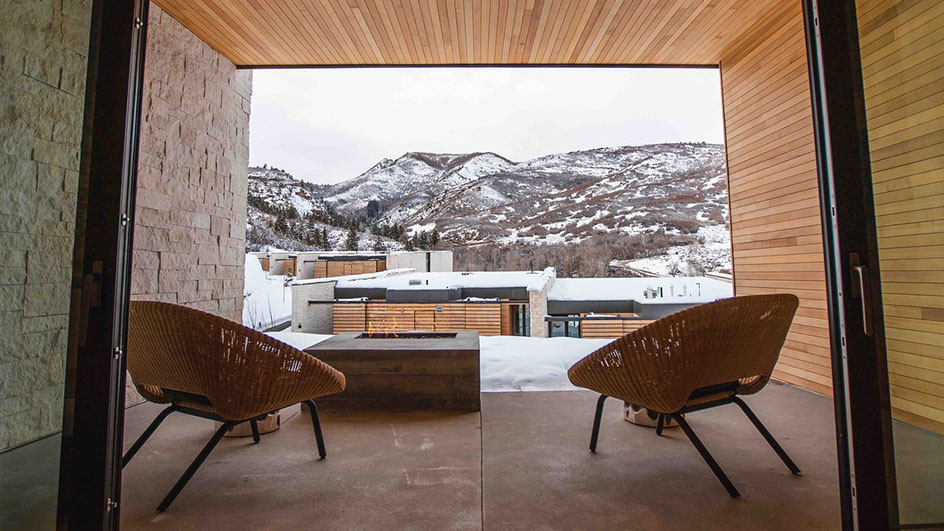 Up Next: 7 DuVine Destinations in This Year’s “52 Places” 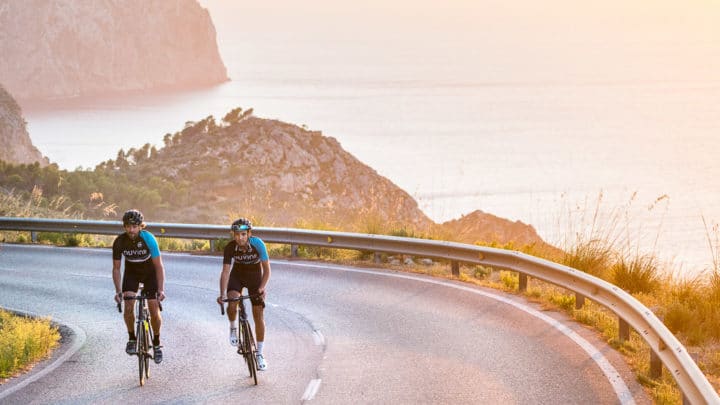 10 Bicycle Adventures to Take This October 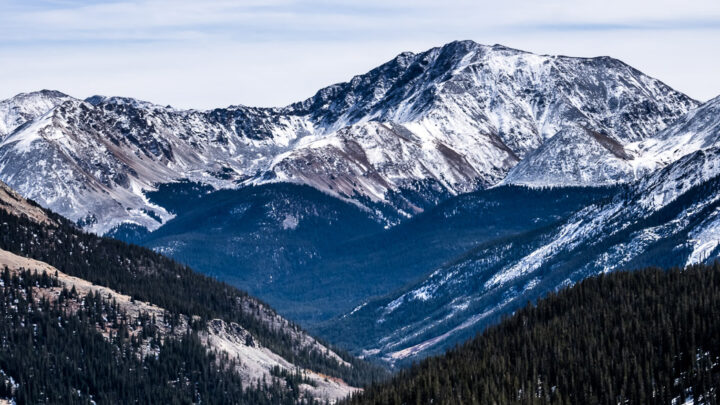