Where do you see DuVine going in the next 20 years?

As we look forward, I want us to keep going back in time. Always remembering where we came from. Those simple moments in life, like enjoying food grown right where you eat it on the farm or spending time talking with a grandmother whose memories are a treasure trove. These are things that seem to be going away, and I want to be sure our guests get to experience them.

I also want to keep creating because I love exploring the world. Even though I want to be in every country, I remind myself that bigger is not better: better is better. It’s important that we always stay true to who we are and fill tours with amazing clients who love to bike, eat, drink, sleep. What is most important to me is to have good company culture and to give back to our community. I love that DuVine is a family of guests, guides, vendors, locals, and I never want to lose that. Make every day fun, safe, and healthy with love and inspiration, and help everyone travel the world by bicycle.

In a way, this isn’t surprising. Riding a bicycle gives us our first real sensation of moving faster than we ever have under our own power, almost faster than we can imagine. As we pick up speed, feel the wind in our faces, and watch the ground zip past and begin to blur under our wheels, it’s no wonder that we can imagine ourselves taking flight and soaring ever higher as the neighborhood disappears beneath us.

Of course, we’re soon (and often) reminded that no matter how much we might feel like we’re flying, the ground is never too far away. Even if, like me, you built jumps in front of your house, pedaling from the end of the block to get up enough speed to leave the ground, if only for a fleeting moment.

But once we learn to ride a bicycle, the simple act of turning the pedals and putting ourselves in motion taps into something more than just an expanding sense of freedom and adventure, something incredibly powerful and almost limitless: our imaginations.

Pedaling to Escape Reality. And Monsters.

One of my favorite things about the Netflix series “Stranger Things” is the central role of bicycles in the plot, and in the lives of the main characters. The story centers around a group of small-town kids leaving childhood behind and fumbling into adolescence. They’re not old enough to drive but they ride bikes. Everywhere. As the town sheriff observes after finding a missing boy’s bike, seemingly abandoned in the woods, “A bike like this is a Cadillac to these kids.” 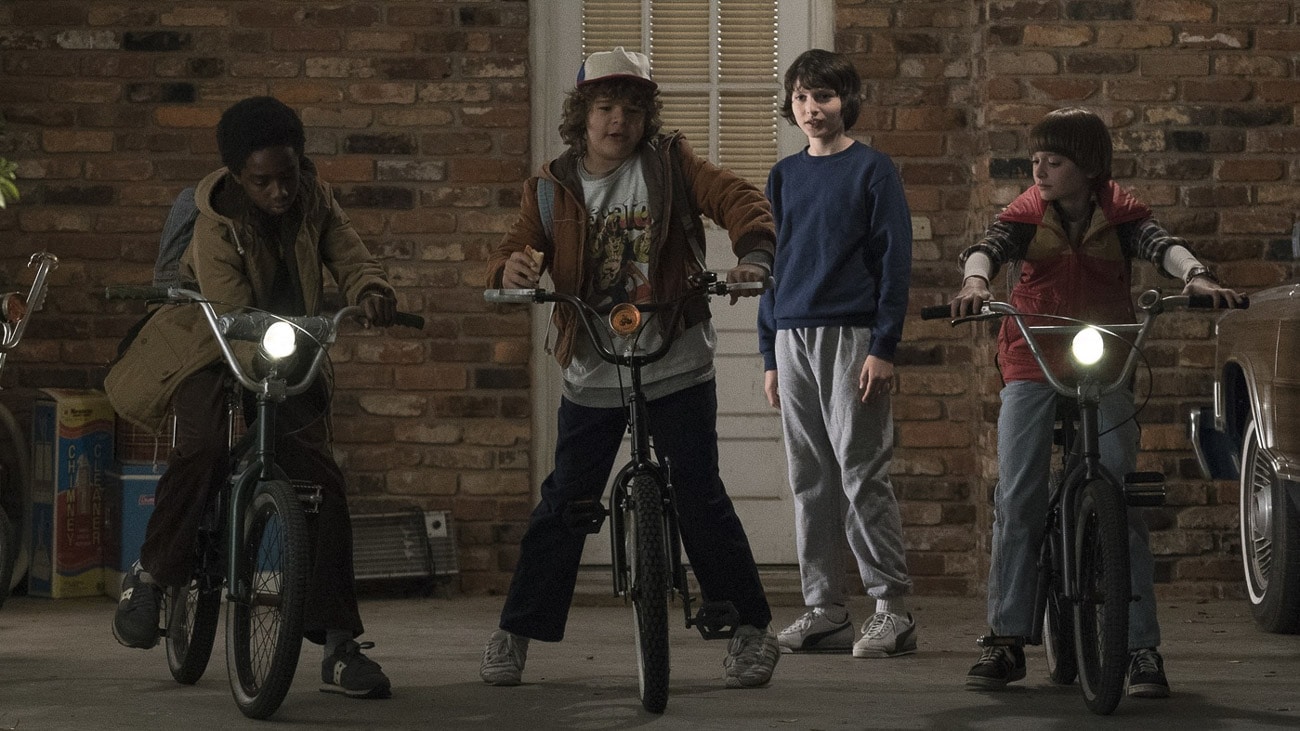 Bikes are also an essential part of bringing the fantasy worlds of Dungeons & Dragons and books into the real world of the main characters. They refer to a foreboding forest on the edge of town as “Mirkwood,” a reference familiar to fans of Tolkien’s The Hobbit and Lord of The Rings. BMX bikes take the place of horses for this unlikely band of adventurers as they search for their missing friend and look for the entrance to the mysterious world of “the upside-down.”

Perhaps most importantly, bikes become a means of escape, first from the world of adults and rules, later from…well, I don’t want to spoil it for you. But when one of your friends can travel between dimensions and move things with her mind, you can also do things like this: 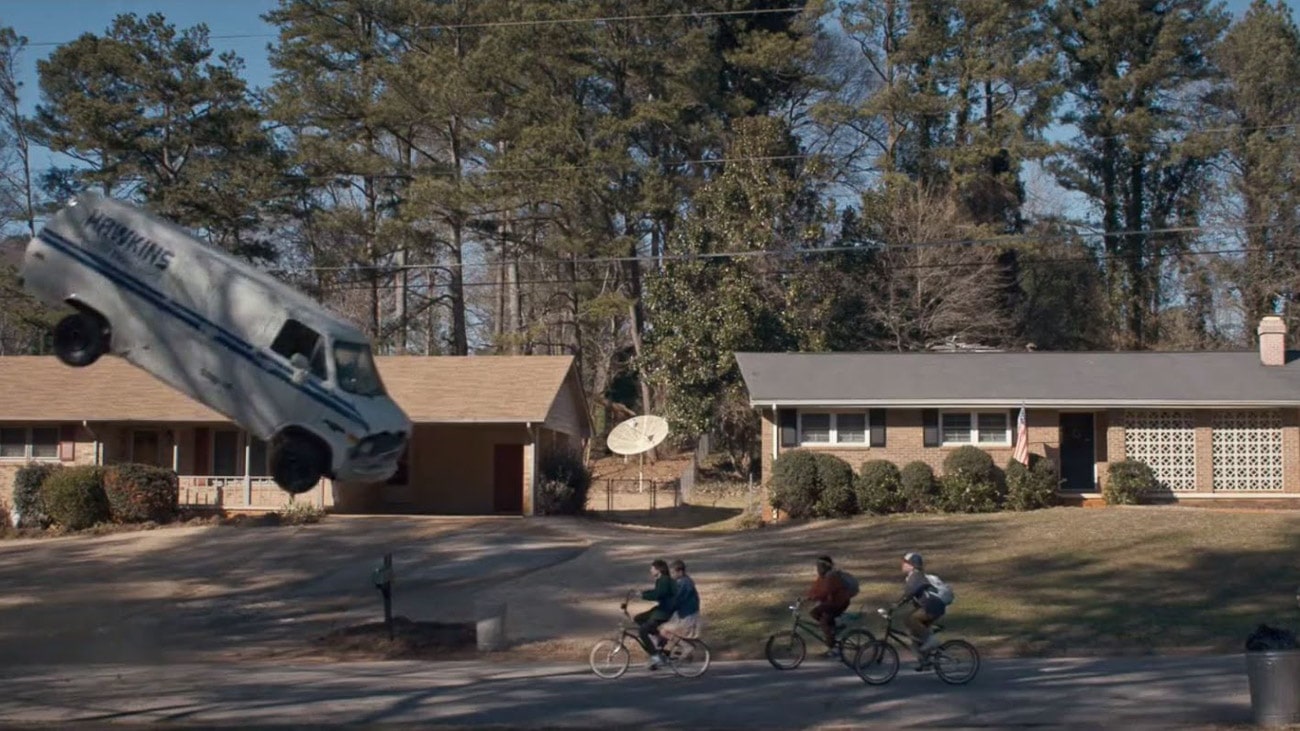 Truly, anyone who’s spent a lifetime on a bicycle, dodging indifferent or hostile motorized vehicles perpetually threatening life and limb, has fantasized about doing something like this. Or at the very least, having the power to do it.

I’d love to say that, when I started putting together the first ARTCRANK show in late 2006, I already understood the intense fascination and affection that designers, illustrators, and other creative people have for the bicycle. But that’d be a bit of a stretch. What I did know was that the people I rode bikes with were all creative types, and that we were all looking for a project that would combine the two things we loved and obsessed about the most: bikes and art.

After our first show in 2007, I was inundated with requests from artists in the Twin Cities and beyond to be part of our “next show.” Which was funny, because I hadn’t even considered the possibility of doing more than one. Ten years, 70+ shows in three countries, and some 3,000 bike-inspired posters later, I feel fairly confident in stating that bike-lovin’ creatives are definitely not just a Minneapolis phenomena. They’re everywhere.

A few years back, we started asking the artists who designed posters for our shows (and later, our online shop) to tell us what they thought about the relationship between bikes and art, and the role of cycling in their creative processes. Again, everybody has a different take, but one theme came up again and again. The bicycle is the ultimate combination of form and function—a simple, beautiful machine that makes incredible things possible.

Another theme is that riding a bicycle is the perfect antidote to the drudgery of staring at a blank computer screen or sketchpad, waiting for ideas to happen. Bikes are just flat-out fun. And while not everyone says that bikes are part of their creative process, more than a few people claim that they do their best thinking and come up with their best ideas on bike rides.

To me, even the act of riding a bicycle is a creative one. When I think about my daily commute from home to my office, I ride the same roads at roughly the same times every day, and yet my experiences during that time are completely different, all based on what’s happening around me. What the weather is like. Who else is out there. What catches my eye. Something that I happen to notice one day that I hadn’t before.

There’s a very unique, emotional experience with cycling that is different from other forms of locomotion and transportation. Doing a repetitive, familiar action that yields different results every time? That’s basically the definition of the creative process.

One of the questions I’ve been asked a lot in various interviews and casual conversations alike is, “What’s your favorite ARTCRANK poster?”

My stock response is that for me, being asked to pick a favorite poster is a little like being asked to pick your favorite child: You probably have one, but you’re not really supposed to say who it is. And while I’d be hard-pressed to narrow it down a single poster, I’ll close by telling you about one of my all-time favorites.

It’s a poster called “Flying Machine,” by Boston-based artist Brandon Totten. It sold out in no time flat at our 2014 Boston show, and it was one of the 30 posters we selected for reissues to launch the ARTCRANK Bike Poster Shop, our new e-commerce site, in September 2015. (That one sold out too.)

As Brendan says, “It reminded me of my childhood. When I got a bike, it allowed me to go off and do what I wanted on my own accord. Be my own person. I wanted to convey that feeling and that sense of freedom.”

The intrepid would-be pilot in the foreground has his back turned to us, but we can follow his gaze down the winding path to the rickety ramp that will propel him up, up, and away. His bike has been outfitted with makeshift wings and a propeller driven by a chain attached to the rear wheel. It’s an utterly fantastic and impossible scheme that seems certain to fail.

But, like every truly brilliant idea in history, it’s so crazy it just might work. You can feel the tension in the air, the sense that something’s about to happen, and you want to be a part of it. You want to be in it.

It’s been my pleasure and privilege to see a lot of amazing artwork inspired by bicycles over the past decade. And sometimes, when I look at a great poster for the first time, I’m completely gobsmacked, wondering how or where in the world the artist got the idea. For me at least, this one was easy.